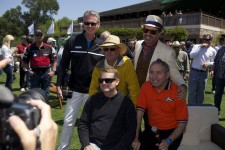 Carmel, Calif., March 23, 2017 (Newswire.com) - ​The Quail Motorcycle Gathering has announced two-time AMA Grand National Champion and three-time World 500 Grand Prix Champion Kenny Roberts as its “Legend of the Sport” for the 2017 event. Each year The Quail Motorcycle Gathering selects a Legend of the Sport in recognition of achievements in racing and contributions to the sport of motorcycling.

“Few figures in American motorcycle racing history have been more influential than Kenny Roberts,” explained Gordon McCall, Director of Motorsports at The Peninsula Signature Events. “On top of his incredible list of racing accomplishments, his success on the world stage stirred the hearts of American race fans and forever changed the way motorcycles were raced.”

His success on the world stage stirred the hearts of American race fans and forever changed the way motorcycles were raced.

Gordon McCall, Director of Motorsports at The Peninsula Signature Events

With a racing career spanning 13 years, multiple championships, and dozens of race wins, Kenny Roberts has left an indelible mark on the sport of motorcycle racing in the United States and around the world. A product of rural Central California, Roberts quickly found success as a dirt track racer, earning the AMA Rookie of the Year Award in 1971. The following year he won the first of his 32 career Grand National wins, and in 1973 won the first of two straight AMA Grand National Championships. Along the way Roberts became just the second racer to complete the AMA Grand Slam by winning a mile, half-mile, short-track, tourist trophy and road race event in both the 1974 and 1975 seasons.

After winning the 1977 AMA Formula One road racing championship, Kenny Roberts departed the American racing scene destined for international greatness. In his first season, Roberts won the FIM World 500cc Grand Prix Championship, becoming the first American to win a 500cc Grand Prix title. This was the first of three consecutive titles for Roberts, who in 1979 was named the AMA Pro Athlete of the Year for the third time.

At the end of the 1983 season Roberts retired from full-time racing and embarked on a new phase in his career by starting a race team to compete in the World 500 Grand Prix Championship. In 1990 the team rose to dominance by producing two world champions in Wayne Rainey and John Kocinski, winners of the 500cc and 250cc titles, respectively. Rainey would go on to win two more championships for Marlboro Team Roberts in 1991 and 1992. In 2000, Kenny Roberts Jr. won the World 500cc Grand Prix, marking the first time that the son of a former champion won the title.

Kenny Roberts’ legacy is greater than his racing accolades. Known throughout his career for his aggressive riding style, Roberts changed the international road racing landscape by introducing the dirt-track technique of sliding the rear tire to maximize speed. During his years of competition, Roberts was also an advocate for racers and was instrumental in the FIM’s reforms to increase prize money and impose stricter safety regulations. Off the track, Roberts has been a longtime supporter of Welcome Home Heroes, a nonprofit that provides assistance to local Central California veterans of the U.S. military and their transition from active duty to private life.

"Monterey has always been a favorite place of mine,” Roberts commented. “I've spent many years racing there as both a rider and a team owner. The Quail Motorcycle Gathering has become the preeminent show of its kind, and I am very pleased to be honored this year as their Legend of the Sport.”

Witness this celebration only at The Quail Motorcycle Gathering on Saturday, May 6, 2017. Attendees can save $20 by purchasing discounted pre-sale tickets online at www.quaillodgetickets.com. Full price tickets will also be available at the gate on the day of the event.

With live entertainment, lifestyle vendors, a signature beverage pavilion, and a dedicated kids area, The Quail Motorcycle Gathering is a true celebration of motorcycling. Entry includes a gourmet barbecue lunch, parking, and gear valet service for those riding a motorcycle to the event. Learn more on the event website and follow the action on Facebook, Instagram and Twitter.

Get notified about new releases.

Sign up for email updates from Acorn Woods Communications.