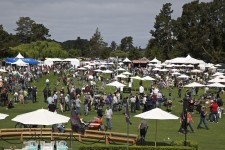 Carmel, Calif., March 3, 2017 (Newswire.com) - ​The Quail Motorcycle Gathering is preparing to celebrate the 50th anniversary of the iconic Norton Commando at this year’s event, set for Saturday, May 6, 2017 at Quail Lodge & Golf Club in Carmel, CA.

Each year, attendees at The Quail Motorcycle Gathering marvel at the more than 400 motorcycles, scooters and bicycles across a variety of categories, from rare specimens in the Antique class to the most innovative designs in the Custom/Modified class. This year the festivities will be centered around the 50th Anniversary of the Norton Commando, setting the tone for the event while spotlighting one of the most recognizable and influential bikes in motorcycling history.

I don't know that there's a specific model that resonated more with people that were into British bikes.

Gordon McCall, Director of Motorsports at The Peninsula Signature Events

Norton Motorcycles unveiled the Commando at the lavish 1967 Earls Court Show in London. The Commando was an immediate hit thanks to the revolutionary “Isolastic” frame-dampening system that eliminated the excessive vibrations that plagued its predecessors. Over the next decade more than 50,000 units were produced and sold, and by 1972 it had been awarded “Machine of the Year” five consecutive times by the U.K.’s Motor Cycle News. The bike’s uniquely smooth ride, the unforgettable “Norton Girls” advertising campaign, and TT racing success in the early 1970s all contributed to the Commando’s success both in the UK and abroad.

“Personally, Norton Commandos struck a chord with me even before I owned my first motorcycle,” remarked Gordon McCall, Director of Motorsports at The Peninsula Signature Events. “I was just mesmerized by it, and I think a lot of motorcyclists had the same reaction I did. I don’t know that there’s a specific model that resonated more with people that were into British bikes.”

The Quail Motorcycle Council is working hard to bring this feature to life, curating a variety of Commandos as well as other Norton models that serve as the centerpiece for this year’s event. “We are working on getting one of every Commando model as well as one of every color from those early years,” explained Lorin Guy, advisor to The Quail Motorcycle Council. “This was the late 1960s, when everything coming out of England was flashy and colorful and the Norton Commando was no exception. This motorcycle is worthy of recognition and we look forward to paying tribute to its unique place in history.”

Witness this celebration of the Norton Commando as well as motorcycles in ten other classes only at The Quail Motorcycle Gathering on Saturday, May 6, 2017. Discounted pre-sale tickets are available online at www.quaillodgetickets.com.

With live entertainment, lifestyle vendors, a signature beverage pavilion, and a dedicated kids area, The Quail Motorcycle Gathering is a true celebration of motorcycling. Entry includes a gourmet barbecue lunch, parking, and gear valet service for those riding a motorcycle to the event. Learn more on the event website and follow the action on Facebook, Instagram and Twitter.

Get notified about new releases.

Sign up for email updates from Acorn Woods Communications.